In the Member Training Session titled "How to Get Your Website Found on Google," we describe a very specific type of Google Adwords campaign centered around search traffic for your name. The purpose of the campaign is to help you control and improve your "online presence" (the impression people get when they look you up on the internet) by getting your website at the top of the search results page.

Get the instructions and watch a demonstration video of setting up this campaign here.

However, if this is to be your first Google Adwords campaign, there's an extra step you must take before you can follow those directions.

When you first create your Google Adwords account, Google will prompt you to set up your first campaign. This is a guided walkthrough intended to help users get familiar with the advertising platform. They do this because Google wants people using Adwords to feel successful in setting up an ad right from the get-go, otherwise it runs the risk of people starting a campaign, becoming frustrated, and leaving the campaign incomplete, which means that Google wouldn't generate any ad revenue.

That's all well and good, but the problem is that this first campaign is limited. It does not allow you to set your objective like is necessary to run a Google Adwords campaign targeting search traffic for your name. In our opinion, running the campaign that Google prompts you to setup would be a waste of your money.

Therefore, what you must do is set up your first campaign... then immediately turn it off.

The reason it has 0 clicks under "Daily Potential Reach" is because we removed all search terms from the list. But you could also leave them all. Again, it doesn't matter because you are never going to run this campaign.

Turning Off Your First Campaign

After you've followed the prompts to set up your first Google Adwords campaign, you will see a screen like this, which gives you the option to navigate back to your campaign manager. Click the blue-button that says "Go to your account." 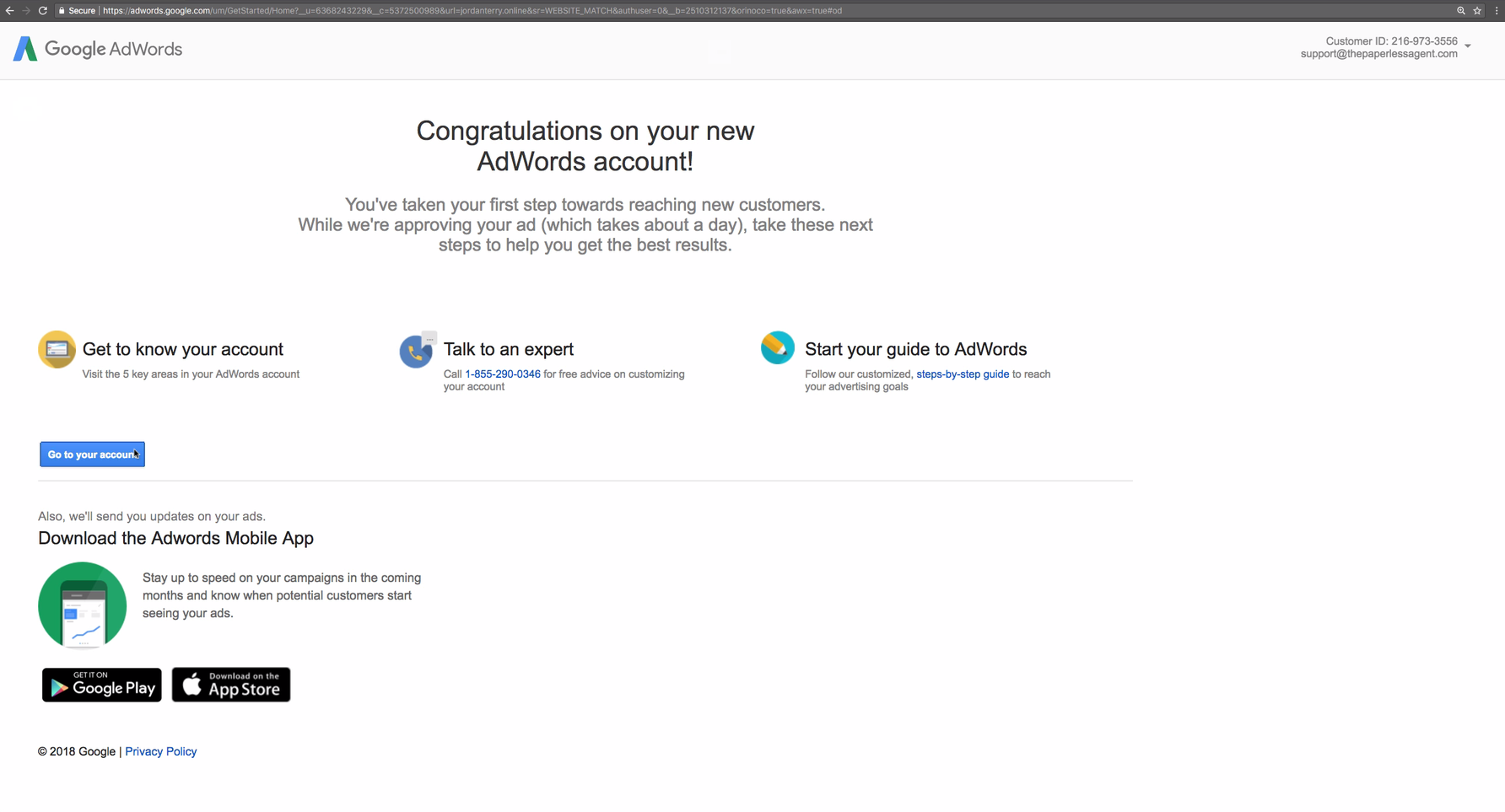 You will see a screen like the one below. What you want to pay attention to is that you're in the "Campaigns" menu (on the center navigation bar). Find your first campaign (probably titled "Campaign #1, like in the screenshot below), and hover over it. A checkbox will appear to the left of the campaign name. Check it then select "Edit" in the blue bar that pops up. 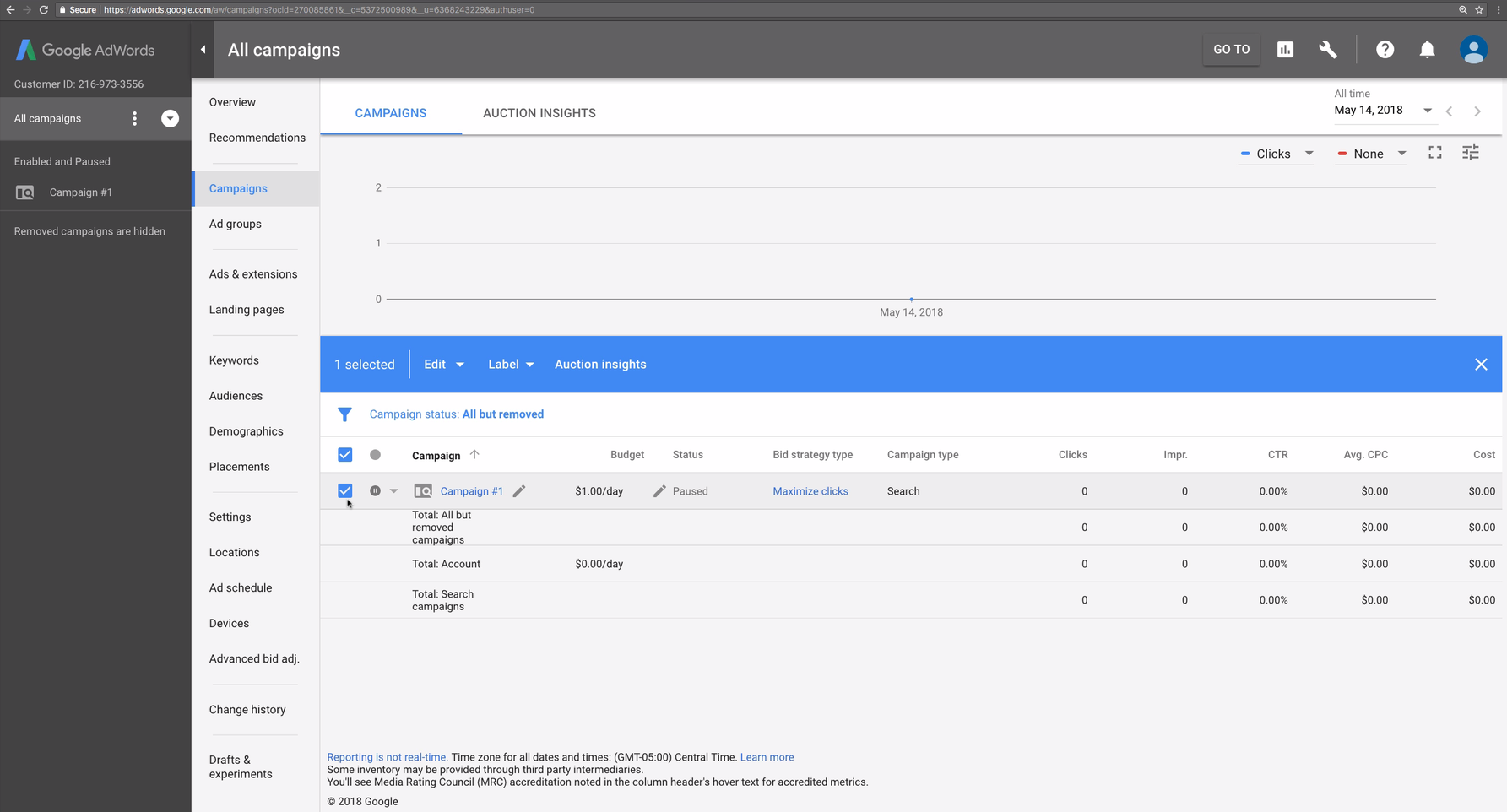 From the dropdown menu that appears, select "Remove." 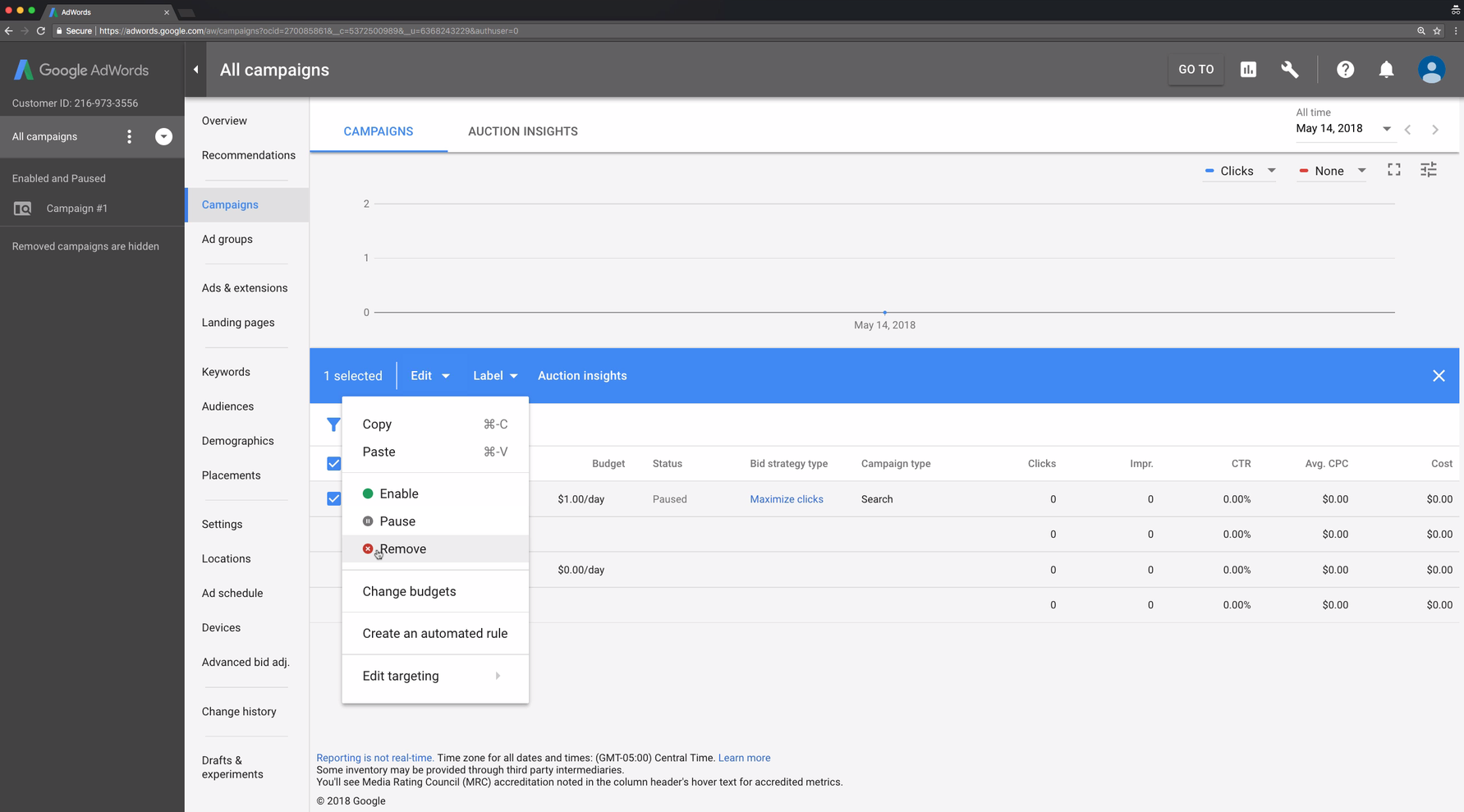 And then you're done! You've just created and deleted your first Google Adwords campaign.

To setup a Google Adwords campaign that will drive traffic to your website when people search for your name and location, follow the instructions provided in the link below:

Did you find it helpful? Yes No

Send feedback
Sorry we couldn't be helpful. Help us improve this article with your feedback.